Biggest isn’t always best – particularly in the travel world. On tiny Molokai, you’ll soon discover everything you always dreamed Hawaii was, but could never find on the other islands.

The fifth largest of the islands, Molokai is less than 40 miles long and less than 10 miles wide, and it doesn’t have a single skyscraper or shopping mall. In fact, you can drive all over the island without ever finding so much as a traffic light. Seven small hotels offer 140 rooms – that’s it – and in most of them, your wake-up call will be the sound of a rooster crowing under your porch. Don’t look for glitzy beach bars, t-shirt shops or casinos. You won’t find a single one.

What you will find are roughly 7,400 proud, friendly people ready to tell you that they’re true Hawaiians. According to state statistics, more people on Molokai have Hawaiian blood than on any other island, but it’s more than genetics that gives this island its authentic feel. It’s all about an attitude of simplicity and a dedication to maintaining the Hawaiian way of life – of living aloha.

“Aloha” is the first word you’ll learn on any of the islands and you’ll instantly find yourself using it as your standard hello and goodbye. But the word – particularly on Molokai – means far more. “Aloha” translates to: ‘al’ – face-to-face, and ‘ha’ – the breath of life. In its fullest interpretation, aloha means love, friendship and responsibility, extended not just to your fellow human beings but also to the earth. The Hawaiian Islands are one of the most isolated places on the planet, which means in order to survive, their inhabitants must foster harmony and preserve their natural resources. 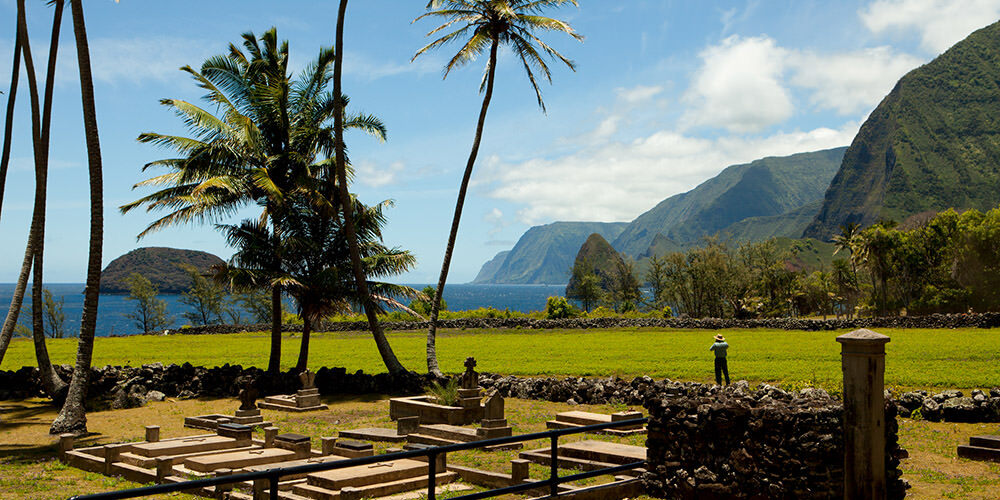 The Hawaiian “Aloha Spirit” law was officially enacted in 1986 and it’s taken very seriously. Aloha is both a state of mind and a way of life – it’s the essence of Molokai. You’ll feel it when you meet Anakala Pilipo Solatorio, the last survivor of a 1946 tsunami that virtually turned Molokai upside down, sweeping through beaches, rocks, trees, homes and anything else in its path. Perhaps because he survived when so many others did not, Anakala feels he was chosen to be the protector and the keeper of traditions in his lifelong home – the beautiful, isolated Halawa Valley.

As you walk down the narrow pathway through the lush green fronds and grasses to his home, Anakala blows his conch shell to welcome you. He stands solemnly encouraging you to come close and to lean towards him until your foreheads touch. “Now,” he says, “we will share the ‘ha’… the breath of life.”

You might feel unsure as you place your forehead against that of a relative stranger and even odder to breathe deliberately into his face and inhale his breath – but the practice is strangely calming and welcoming.

Together, you’ll sit on his palapa-covered porch, and Anakala will tell you his stories of the valley, the tsunami, his family, and his belief in the Hawaiian way of life as he knows it. As you listen to his soft voice and look at his treasured collection of handmade leis, newspaper clippings from 1946, family photos and more, you’ll begin to relax – perhaps like never before. In the background, the sound of a waterfall adds to the ambiance, and you’ll feel as if you’re now understanding aloha a little better.

One of the stories Anakala usually shares with visitor doesn’t take place in his valley, but rather miles away at the base of the cliffs at Kalaupapa. There, in 1866, the first Hawaiian victims of Hansen’s disease (then called leprosy) were shipped by government health officials to quarantine them from the rest of the islands. Cut off on three sides by ocean and on the fourth, by 1,600-foot sea cliffs, Kalaupapa became first, their prison and ultimately, their home.

Being exiled to Kalaupapa meant never again seeing your family, friends or home, but strangely, the story was less tragic than you might expect. A visit to the museum that commemorates the Kalaupapa colony showed that a town was built, marriages happened, children were born, and new families were created. There were dances, parties, celebrations and a sense of real community in a place where there might only have been death and despair. In 1969, the mandatory quarantine order was lifted, but many residents refused to leave, choosing instead to stay where they had built their lives. There are still a handful of people living there, in what is now Kalaupapa National Historical Park, and they plan to remain.

You must see it for yourself, so after leaving Anakala in his beautiful valley, drive to the cliffs overlooking Kalaupapa. The ocean surrounding the settlement is a brilliant cobalt blue, with a bright sun and a soft breeze that will play in your hair. The Kalaupapa residents may have chosen to stay since the ravages of their disease made integration into a larger society uncomfortable, or perhaps they were simply unwilling to leave the pristine retreat the colony had become – a place of quiet, of sunshine, of waves, and of acceptance. Perhaps, they’d created their own version of the aloha way.